The one thing that sticks out in my mind when I think of traveling in Bosnia and Herzegovina is the people. They’re kind, welcoming, sincere and strong. And it’s unimaginable how their country got torn apart during the not-so-distant Yugoslav Wars.

The city of Sarajevo was at the edge of complete and utter destruction in the 1990’s. But some 20 years later, this Bosnian capital has been largely restored and is a fascinating stop on any Eastern European itinerary.

The mixture of Ottoman, Yugoslavian and Austro-Hungarian architecture is a combination you won’t see anywhere else in the world, and the still-visible bullet holes dotting the city are harsh reminders of the horrors the Bosnian people endured just over two decades ago.

Where to Travel in Bosnia and Herzegovina

Things To Do in Sarajevo

As with most new cities we traveled to in Europe, we took the free walking tour of Sarajevo that was organized though our hostel (Hostel Franz Ferdinand).

This tour was quite unique because the guide actually lived in Sarajevo throughout the war. She told us stories of running through the streets and praying that you would not get shot by a sniper.

2. See the spot of the “shot heard around the world”

The tour took us through the main walking street that stretches along the center of the city. The guide brought us to the exact corner where Franz Ferdinand, the archduke of Austria, was assassinated, forever known as the “shot heard around the world” and thus starting the first World War.

As you walk along the walking street, you can travel from Christan area around the Sarcred Heart Cathedral to the Muslim quarter all within half a kilometer.

The bobsled track is surely an Instagram worthy spot, but it is just one stop on the Under the Siege tour run by Hostel Franz Ferdinand. (Note: There are a few tours like this, so you don’t have to go through the Ferdinand Hostel).

This day-long tour takes you to specific locations around town that were affected by the war, including the snipers perch and a portion of the tunnel that allowed citizens to escape under the airport. 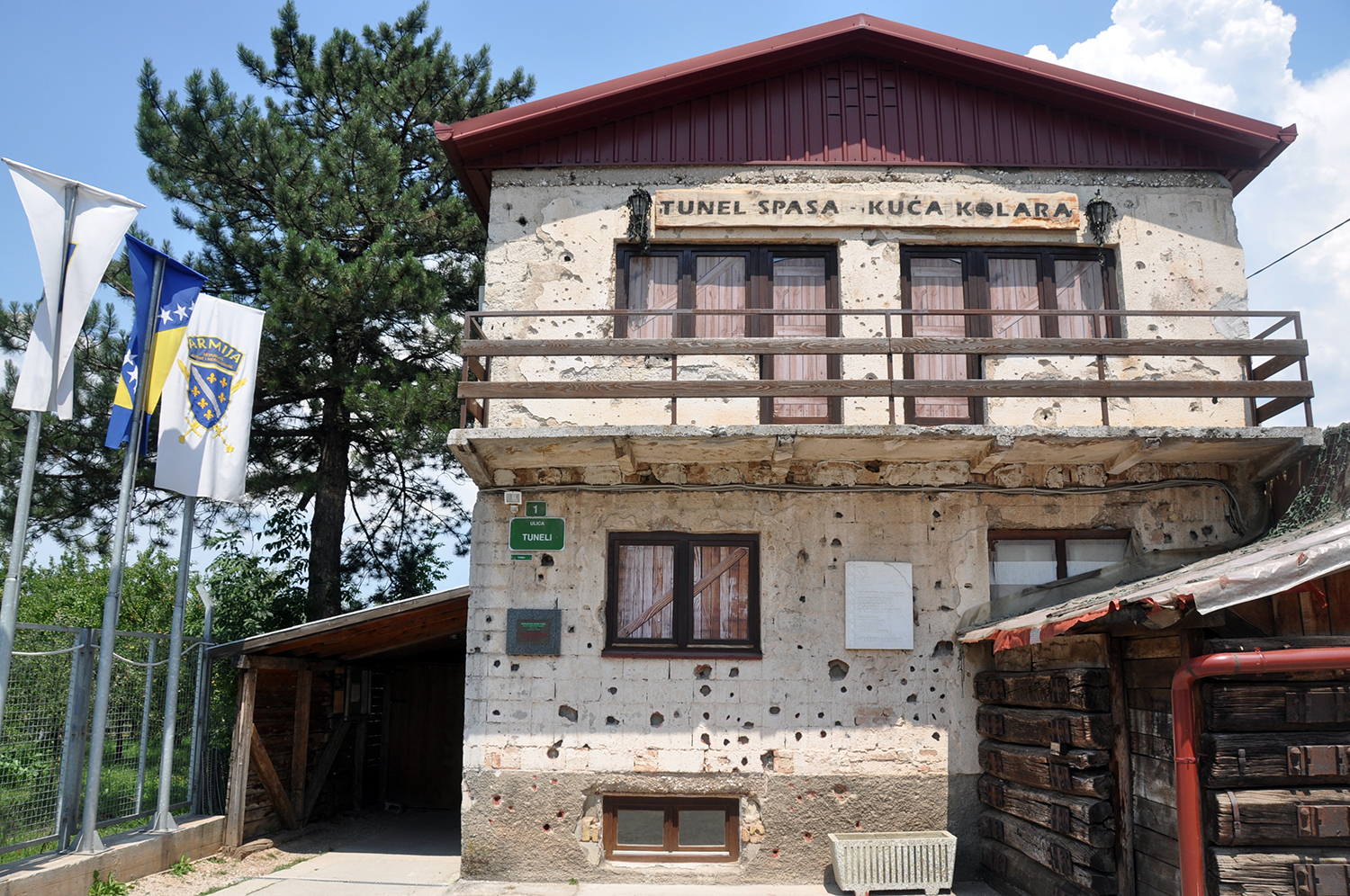 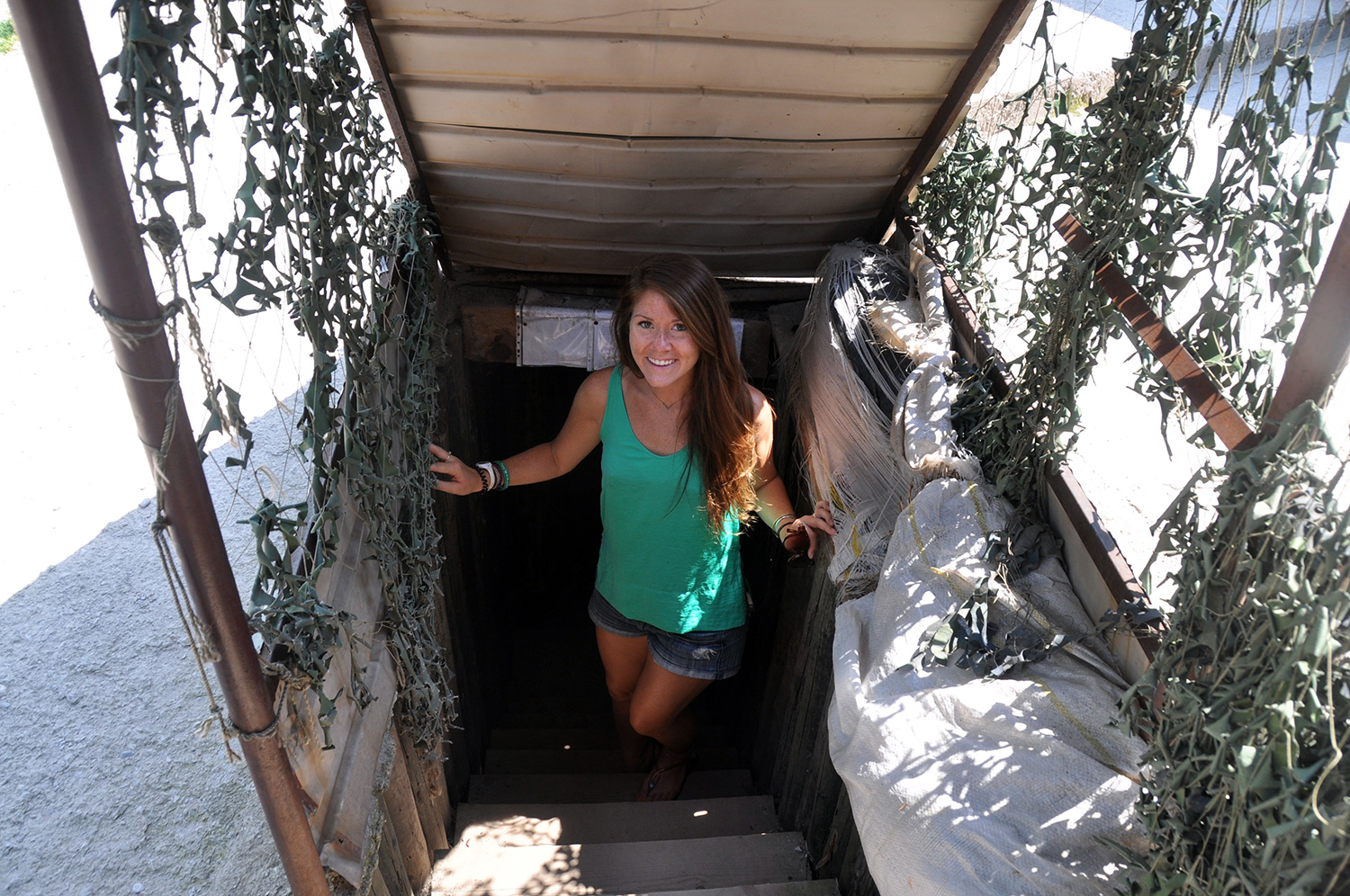 It is utterly fascinating to see these important parts of history and to learn about this country’s troubled past.

One of the major highlights of the tour is visiting the abandoned (and graffitied) bobsled track that was used in the 1984 Sarajevo Winter Olympics. And if you don’t want to do the whole tour, you can actually hike to the Sarajevo bobsled track independently.

If you only have a day in Sarajevo, we would highly recommend visiting the Srebrenica Genocide Museum called Gallery 11/07/95. It walks you through the day where more than 8,000 Muslim Bosniaks were killed, mainly men and boys in the small town of Srebrenica during the Bosnian War in 1995.

It’s a very somber experience, but it tells the history of the country that not many people outside of Bosnia know about.

It reminded us about the time we visited the Killing Fields in Cambodia or Auschwitz Concentration Camp. Both are hard histories to learn, but so necessary so humankind does not repeat these horrors.

Our favorite sunset viewpoint of Sarajevo is east of the city, up on the Yellow Bastion lookout. You could even bring a picnic dinner and watch the sunset from one of the many picnic tables.

Sarajevo was one of our favorite cities in Bosnia. If need more reasons to visit Sarajevo, our friend David has a whole article about it.

Powered by GetYourGuide. Become a partner.

If you want to get your adrenaline pumping, check out this article about whitewater rafting on the Tara River Canyon, located 90 km (56 miles) from Sarajevo.

Traveling from Sarajevo to Mostar

Trip from Sarajevo to Mostar is beautiful. We took a bus so we could not stop and get out, but if you have time hire a car. That way you can stop and take pictures of the Lake Jablanica valley. None of our pictures do it justice because we have the bus window in the reflection, but it is GORGEOUS — trust us. Or Google-image it!

If you are traveling through Eastern Europe by car, be sure to check out this road trip through the Balkans.

We actually heard about this town before we even thought of going to Eastern Europe. One of our friends we met traveling told us about this tour that we HAD to go on. In fact, when we took the tour, nearly everyone had heard of it from a friend or family member who persuaded them to sign up.

It’s one of those tips travelers pass down, and once you’ve been on this tour, you feel the need to tell others about it. So consider yourself in on the secret.

Things To Do in Mostar

The tour is called Bata’s Crazy Tour and is guided by (you guessed it) Bata. And yes he is crazy and he would be the first to tell you. This tour is an entire day and is part sightseeing, part history lesson, part adventure and part food tasting.

2. Splash around in Kravice Waterfalls 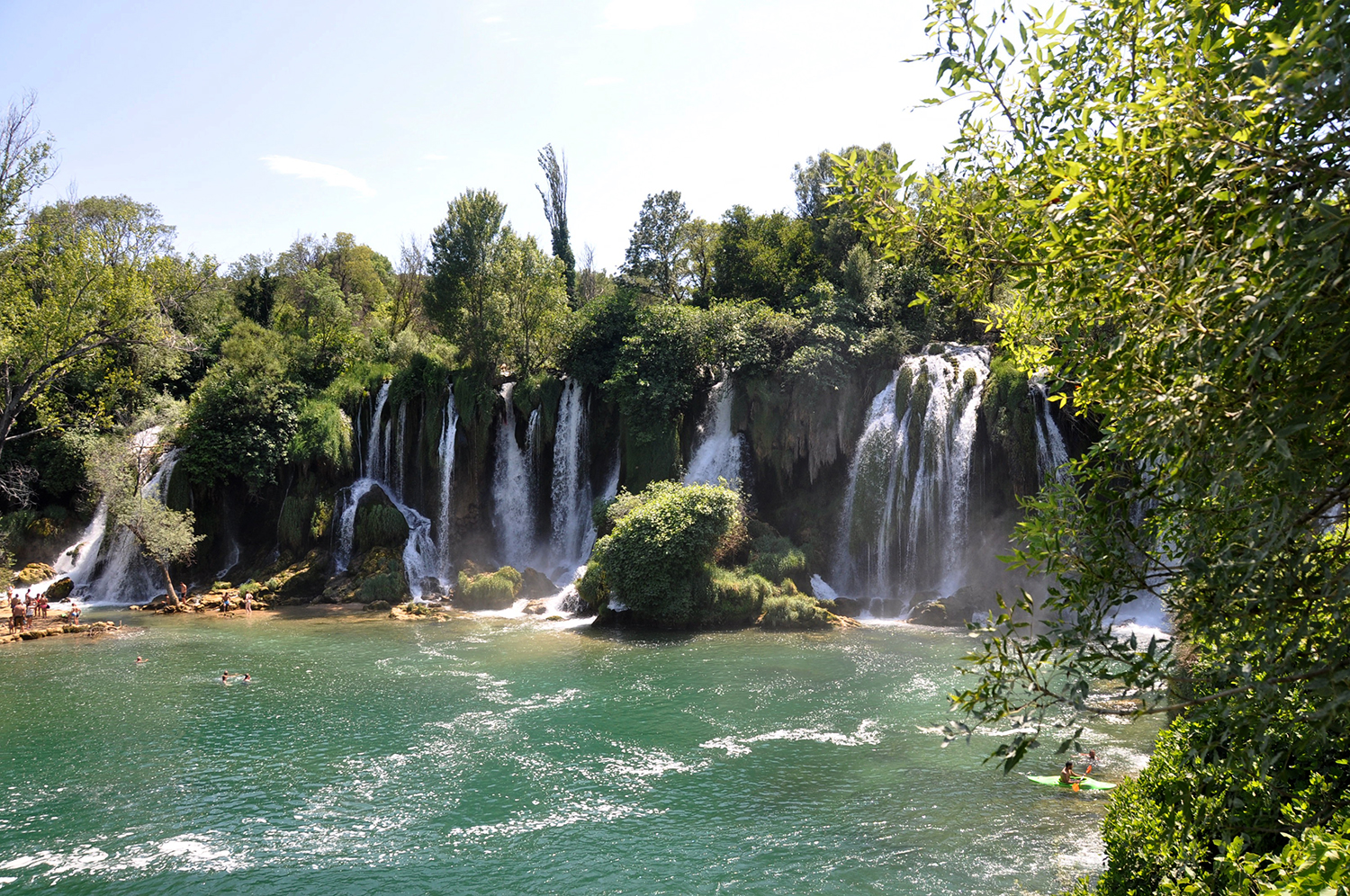 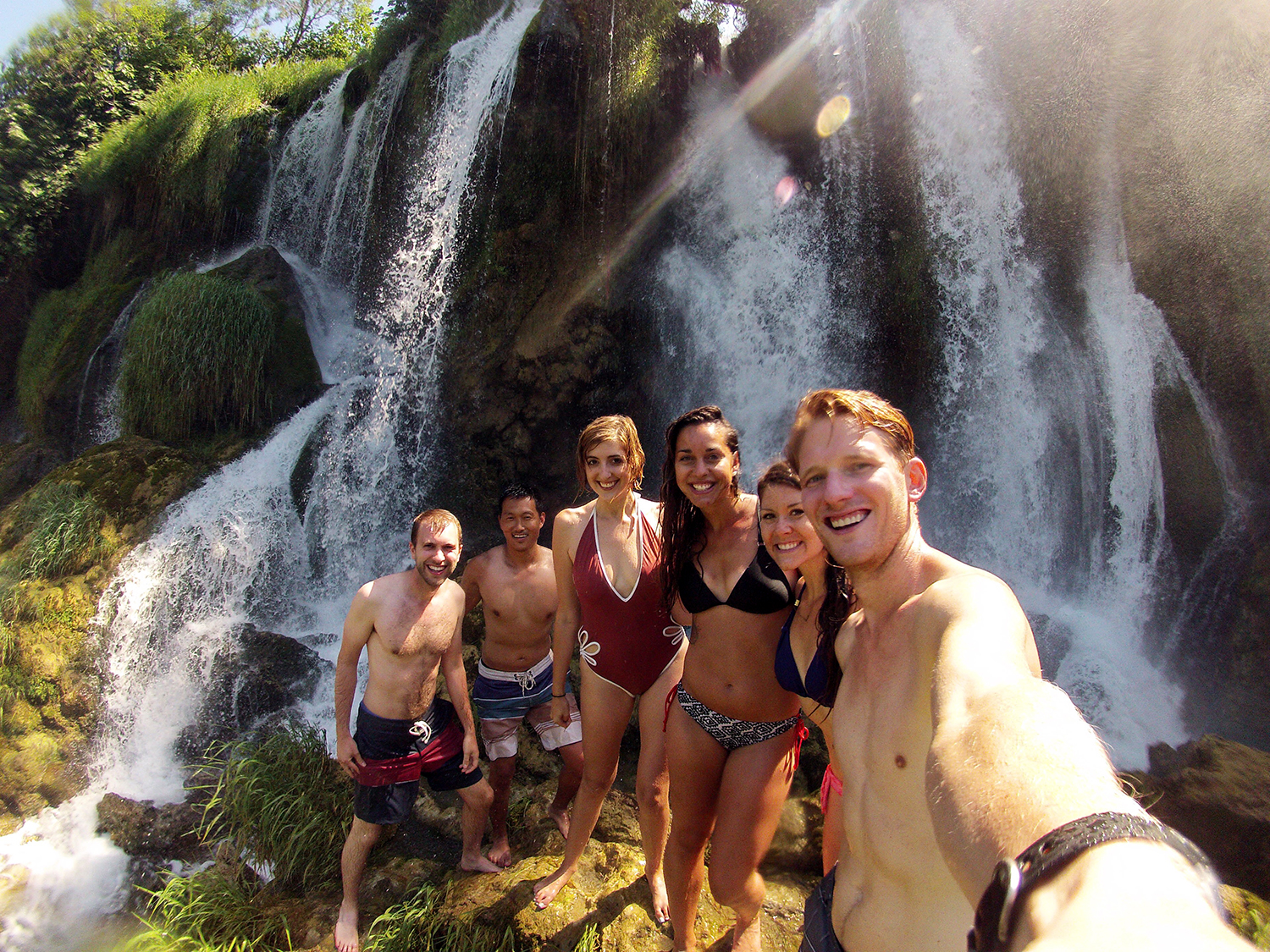 Swim under the rushing Kravice Waterfalls on the tour away from Mostar. There is a restaurant onsite, so if you get hungry you can pick up a bite to eat (and if you’re part of the tour, they provide a traditional (meat-heavy) lunch).

3. Explore the medieval town of Pocitelj

The next stop on the tour was the tiny old medieval town of Pocitelj. We got to climb up the watchtower (picture above) and gaze from the archer’s platform. It was a nice stop to have Bata explain the history of this people. After this we visited a local woman’s house to sip Bosnian coffee, which was a pretty fun experience.

The last stop of our tour was to the Blagaj Dervish House Monastery at the foot of a cave. Legend has it, that naturalist don’t know the source of the river that flows beside the monastery.

We visited all these spots in one day and got to know our van-mates pretty well. Oh, and sprinkle in a heavy dose of history and witty banter from Bata for a 10-hour experience you won’t soon forget.

Even if you were only to spend one day in Bosnia, this tour would give you a wonderful taste of the country and its people.

Note: There are a few of these tours run by guesthouses in Mostar. Each has a cult following, and everyone swears the one they took is the best. Honestly, after talking to a few other travelers who did other tours, it seems that in general they are pretty similar, with a few minor differences here and there.

So whether you take your tour from Bata’s Crazy Tour from Majdas Hostel, Hostel Nina’s day tour, or some other day tour in Mostar, you will see most of the same things and will learn a ton about this country.

5. Walk across the Old Bridge (Stari Most)

Besides the crazy tour, the main attraction of Mostar is the Old Bridge (Stari Most). Once destroyed in the war, and built again to the same beauty, the Stari Most is one of the most iconic images in all of Eastern Europe.

Highly symbolic, the bridge literally is uniting two sides of the country. Walk across the bridge to get a view of the 24 meter (80 foot) drop to the water, and then head down to the river side and watch as jumpers collect money to put on a show for everyone as they dive into the river.

6. Tip-toe through the Sniper’s Tower

Another spot to check out is an abandoned bank building that was used as a Sniper’s Tower during the war. Today, it is relatively safe to walk in, you just have to avoid broken bottles and cracked stairs. It’s a hot spot for street artist to tag and create incredible, thought provoking art.

Budget Friendly/Social Atmosphere: Hostel Majdas – Wonderful staff, great common areas, and awesome days tours. We stayed here and could not recommend it highly enough if you want to meet the kindest host and have a very social atmosphere.

Couple Stay/Mid-range: Apartments Solis – If you prefer more privacy, but are still traveling on a budget, these beautifully decorated, spacious apartments are an incredible value (averaging $15-18 per person), and they’re located close to city center.

Powered by GetYourGuide. Become a partner.

Were these already booked, or are you still looking for a place to stay? Check out this list of hotels in Mostar.

Foods to Try in Bosnia and Herzegovina 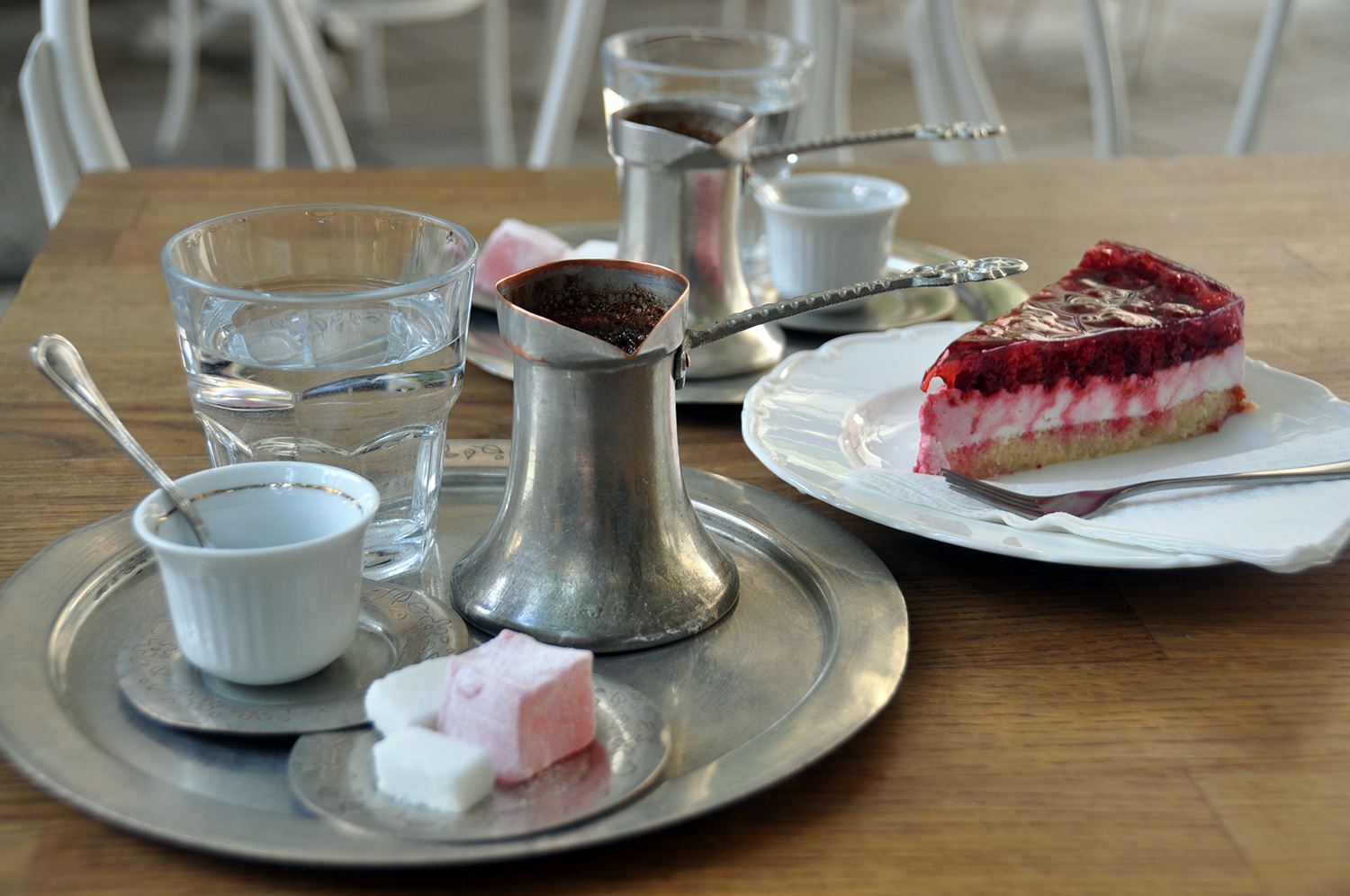 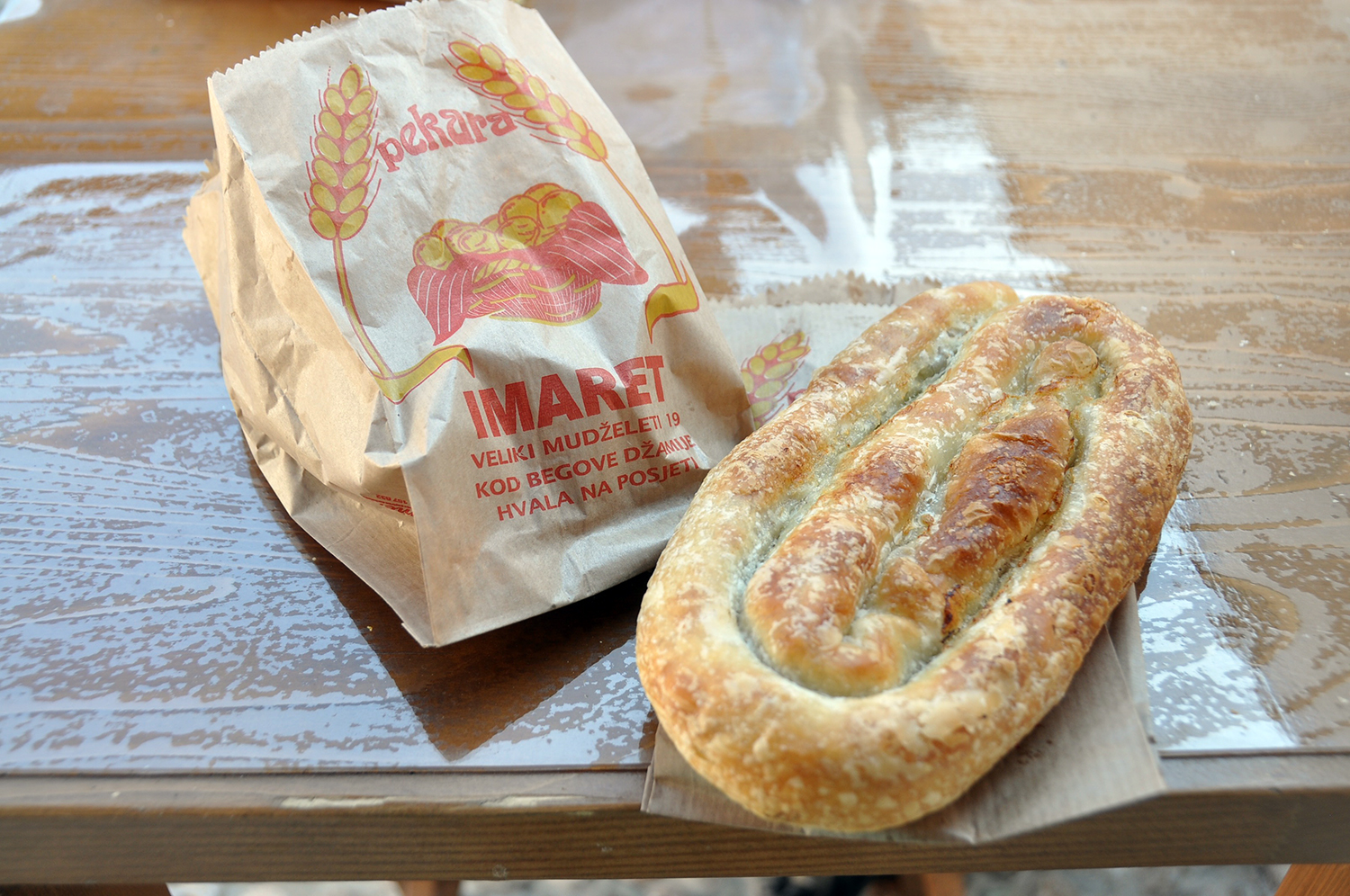 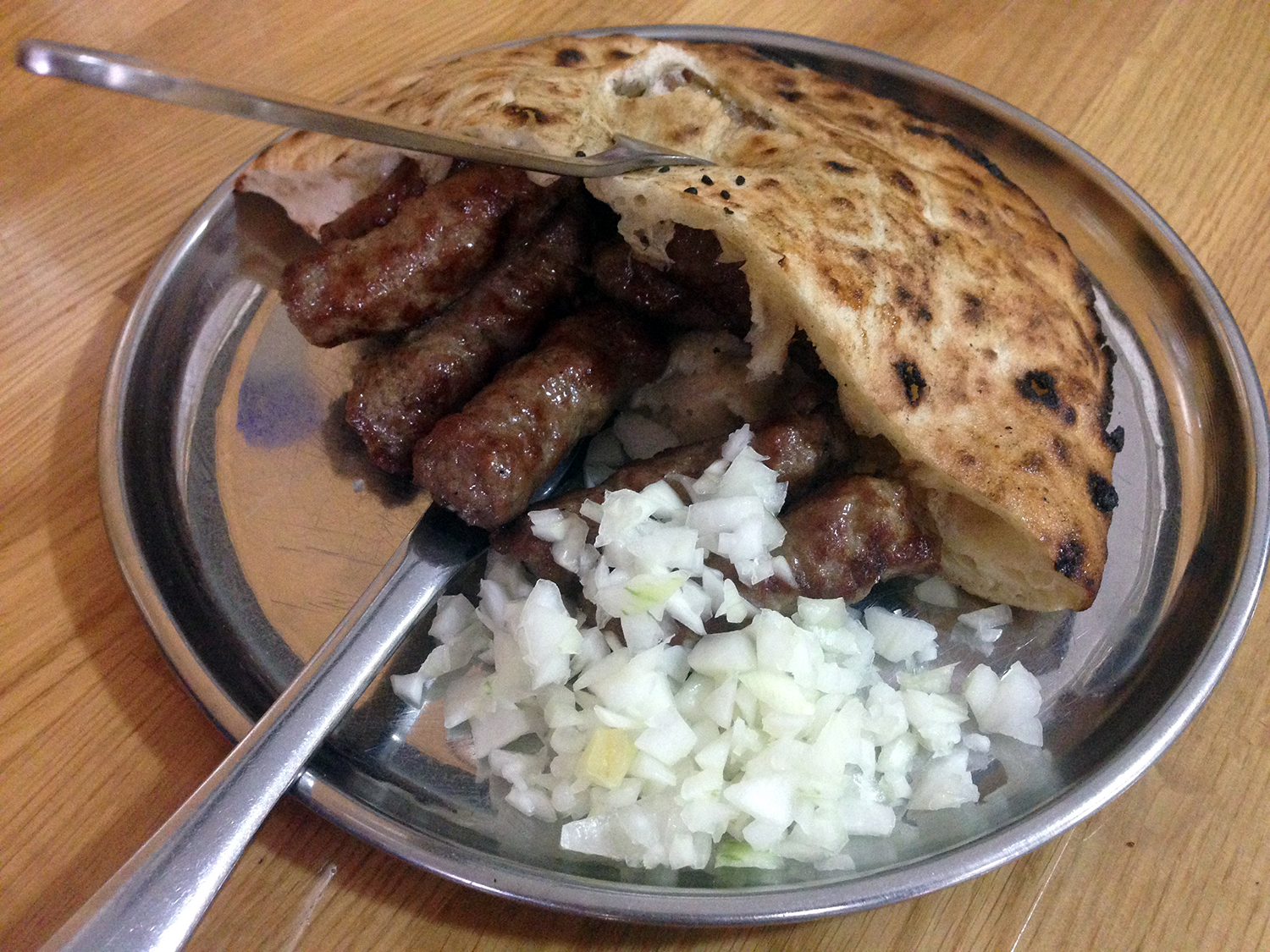 How to travel around Bosnia and Herzegovina

The best way to get around is on a bus. The rail infrastructure is not there as it is in Western Europe, but the buses are fairly cheap and comfortable. We really liked Flixbus when traveling around Bosnia. You could also look into ride sharing programs like BlaBlaCar.

10 Items to Pack for Traveling in Bosnia and Herzegovina

Before you book your trip, think about this:

We never travel without travel insurance. It’s never fun to think about losing your stuff or the possibility of a delayed flight, missing a connection, or heaven forbid you get injured while traveling. It’s best to know that you’ll be covered if anything goes wrong.

We have a whole article dedicated to figuring out the best travel insurance for you, but one company we really like is World Nomads. Get a quote in a couple minutes by filling out your information below:

How are you traveling around Eastern Europe? One way to travel around Europe is by train and the best way to save money on trains is to buy Eurail Pass.

Now to be honest, we didn’t take any trains in Bosnia and Herzegovina because the buses and ride-sharing were cheaper. However, if you are traveling to multiple countries fairly quickly or traveling to Western Europe, purchasing a train pass might be your cheapest bet. Check out the Eurail Pass prices here.

Another great thing about traveling in Europe is airfare is so much cheaper than in North America. One of our favorite sites to book flight is Skyscanner.

It’s so easy to use and we found some our cheapest flights using their “Show Whole Month” feature, where you can select your route and it tells you the cheapest days of the month to fly.

We have tons of resources for you on popular and off-the-beaten-path destinations in the region. Check out the 19 places to visit in Eastern Europe you absolutely cannot miss and read some of our favorite articles below. 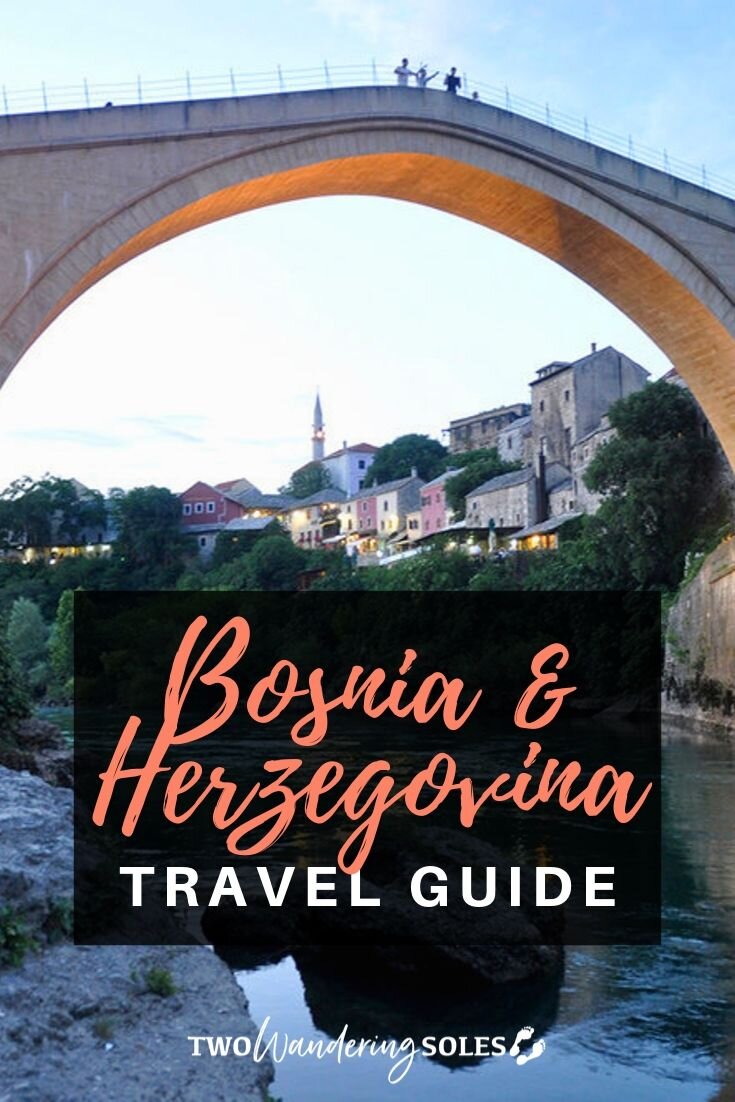 Have you traveled to Bosnia and Herzegovina? Tell us about your additional travel tips in the comments.

Are you planning a trip there now? Let us know if you have any questions in the comments below. We’re happy to answer them.

Comments (3) on “Best of Bosnia and Herzegovina: What to See and Do”