Even though Cartagena is situated on the Caribbean Coast, the beaches within the city leave a lot to be desired. If you really want some time in the sand and surf, you should venture elsewhere.

Our first visit to Cartagena back in 2014 was in the month of February, and we were seriously craving some time in the sun (we had just escaped Minnesota’s frigid winter, after all!).

We kept hearing people talk about Playa Blanca and its white sand, so we were sold. However, we didn’t fully do our research or know what to expect.

Below, we’re sharing an excerpt from our travel journal so you have an idea of what a day trip to the Rosario Islands entails, and you can decide for yourself whether or not this experience is for you.

Related Reading: Top things to do in Cartagena — we’ve traveled to this city 3 times and have rounded up our favorite experiences.

Since our beach day at Bocagrande wasn’t exactly what we were expecting — think cigarette butts everywhere, dirty waters, nearby traffic and annoying vendors! — we decided to make a day trip to the Rosario Islands to relax on the famous white sand beach of Playa Blanca.

One morning, we walked to the marina and bought tickets for a boat. We didn’t actually leave the harbor until about 30 minutes after we were slated to leave. Not really surprising. After all, we’re in Latin America, and almost nothing starts right on time.

The part we weren’t expecting, however, was that we were on a broken boat. Well, not exactly broken, but one of the motors wasn’t working. We spent the first 40 minutes cruising at a snail’s pace, while other boats sped by.

Finally, a captain from another boat tossed a wrench aboard, and a few whacks of the motor later, we were speeding out of the city. Ah, the powers of Colombian engineering!

As we approached the beach, I could tell it was’t just another Boca Grande. No, this beach was beautiful. White sand, clear turquoise water, palm trees swaying in the wind, and thatched roof huts lining the beach.

As soon as I jumped off the boat, I was surrounded by a swarm of vendors trying to sell me every service available. One older man shoved an oyster in my hand, cracked it open and squeezed a lime over it. “Probar este, gratis!” Try it, free!

*Note: We heard from someone later that they tried the supposedly “free” oyster, then was charged 5,000 pesos (enough for a decent meal).

At the same time I had an oyster in hand, a woman squirted a glob of lotion on my shoulders and started rubbing them. “Masaje, señorita!” Massage ma’am!

Yet another man tried to put a pearl bracelet around my wrist.

Ben was climbing out of the boat when he lost a sandal. Imagine his surprise when, after finding his shoe and heading to shore, he saw me surrounded from all sides by vendors! I was frozen, unsure of what to do, so it was a relief when Ben grabbed my hand and led me away.

Though we did wave off vendors most of the day, we eventually fell victim to massages. They felt good, but we had to tell the women to stop after about 20 minutes. They kept telling us we were “so tense because in America you work too much”, and they wanted to charge us more money.

No way was I getting tricked this time!

After playing in the turquoise water and relaxing on the sand, we enjoyed fresh fish for lunch, followed by jugo de maracuyá con leche (passion fruit juice) made right in front of us. Talk about paradise.

Responsible traveler tip: Try to bring along your own reusable silverware. We now carry an awesome set from ToGo Ware that is made from bamboo, but back in 2014 (when this photo was taken) we didn’t have any.

By the early afternoon, we were pretty exhausted, sunburned, and ready to take a cold shower. (I have never enjoyed cold showers until staying in Cartagena!)

Although the boat ride out to the beach was a bit crazy with the motor not working and all, the ride back was INSANE. No exaggeration.

The afternoon brought choppy winds, and the waves around us rose two or three meters. But that didn’t slow the captain down. People were crying (yes, seriously) and getting sick around us, waves were splashing on board.

With each wave, the boat would fly up in the air and smack back down sideways, making everyone clutch their seat. Well, there were two seats onboard without backs, and guess who was sitting on them? That’s right, Ben and me.

I don’t get seasick and I’m not afraid of fast boat rides, but there were a handful of times I seriously thought we wouldn’t make it back.

About halfway back the waves were much calmer, making for a much more pleasant ride. Since we weren’t clutching onto anything we could find and fearing for our lives anymore, we were able to focus on other things – like how badly we got sunburned! Ouch!

How we would do it differently

If we were to venture to Playa Blanca again, we would go independently and stay overnight.

We met a handful of others doing this for a day (or even a few), and they were able to explore past the touristy stands and have some time without the crowds after the boats leave at 2 p.m.

There are a handful of guesthouses to stay at on Isla Grande or more developed (and accessible by car!) Isla Baru. We would have liked some extra time to explore and relax. 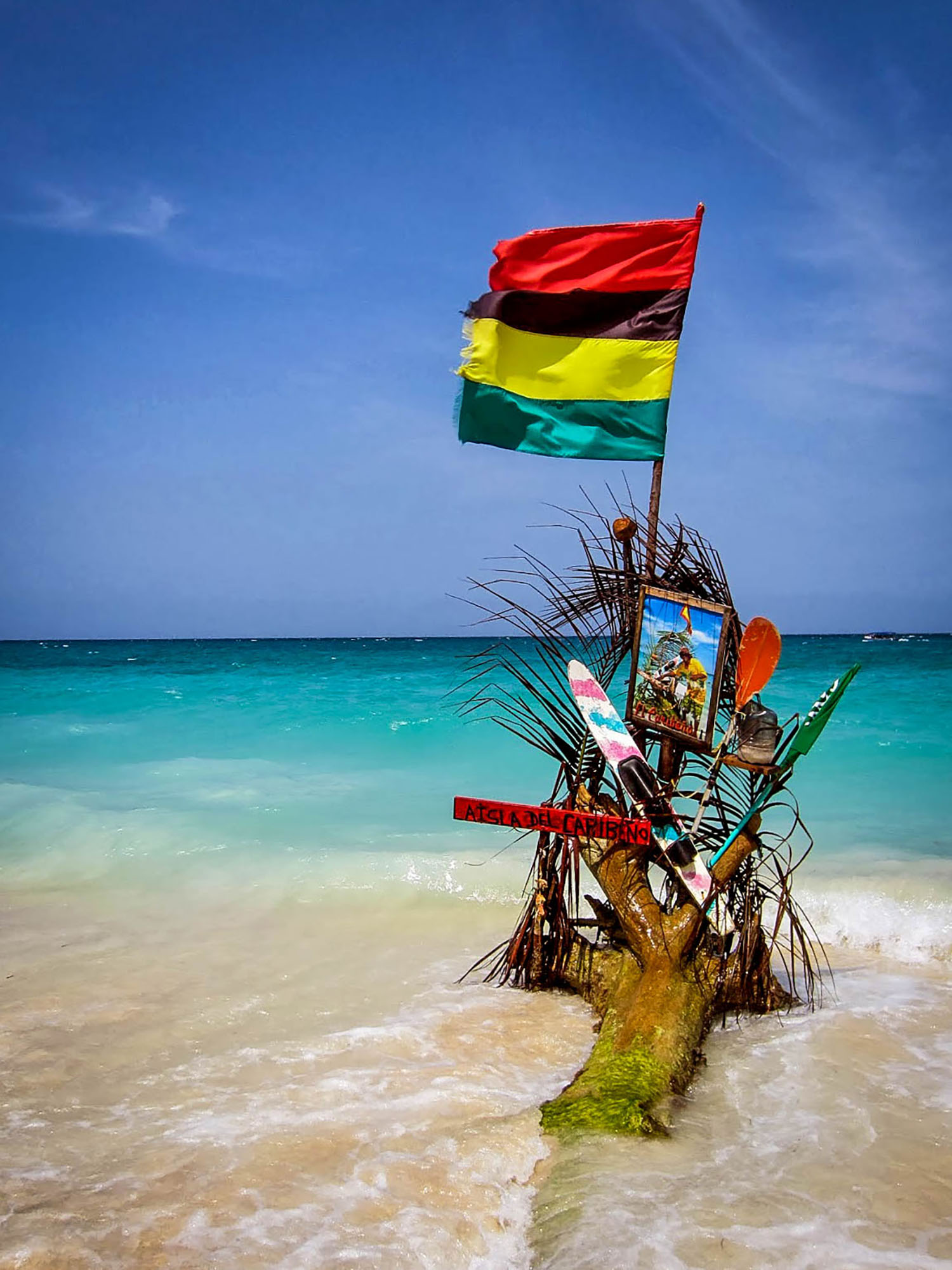 If you are craving a day at the beach, and don’t have time to venture outside of Cartagena, we’ve got a few other recommendations for you.

Planning a trip to Rosario Islands? Save this article to Pinterest! 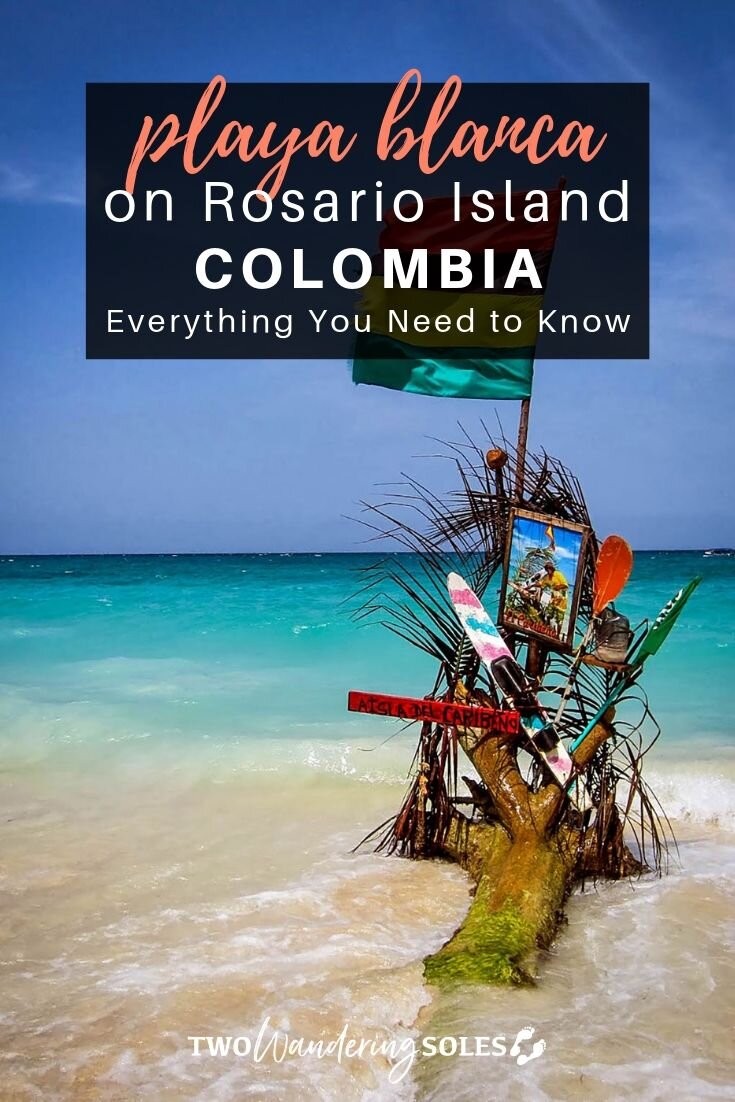 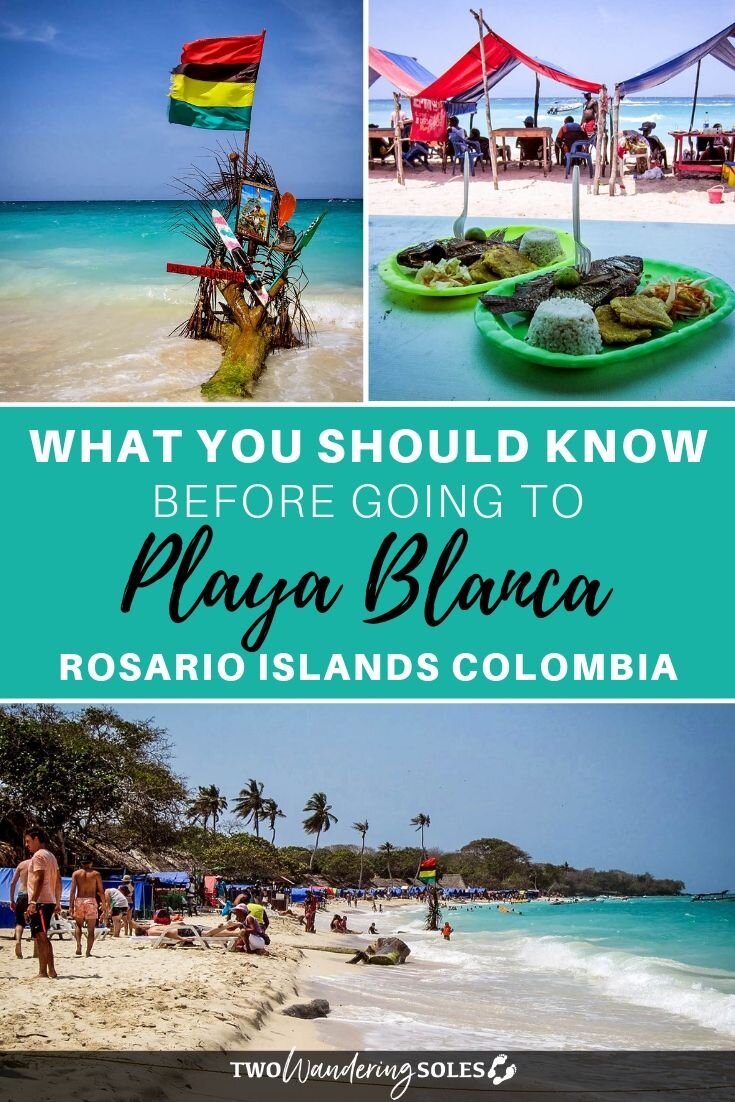 Have you been to the Rosario Islands? Does Playa Blanca sound like a place you’d enjoy or not?!

Comments (5) on “Rosario Islands: Read This Before You Go to Playa Blanca”