To this day, our homestay in this remote Hmong village in the hills of Laos was the most amazing cultural experience we’ve encountered. Come along as we share our story!

I couldn’t understand any of the words that were being spoken around me, but I smiled as if I did. I held a piece of chicken between my greasy fingers and nibbled at the meat. My stomach begged me to stop, but the smiling faces urged me to keep eating so I picked up another piece.

I brought the piece of chicken to my lips and suddenly stopped. I was staring straight into the eyes of a chicken. Well, I guess rooster is the correct term because it definitely had a red comb on top of its head. I had to get rid of it, but wanted to spare the feelings of my gracious hosts, so I did what any person desperate to hide a rooster head would do: I covered it up with other bones, careful not to attract any attention.

It was Hmong New Years, and the people of this remote village in Laos welcomed Ben and me into their homes as if we were old friends. Hugs were given before names were exchanged, and three families argued over who would host us for dinner, so we went to all three. Which brings me back to my stomach. It was one bite away from exploding, but a shot of homemade whiskey was headed in my

The room temperature liquid turned hot in my throat, and as I put my glass down I made eye contact with the chicken. Its beak was stubbornly poking out of the pile of bones I’d tried to disguise it with.

I looked over at the young man sitting across from me who was holding a chicken head between his fingertips and greedily gnawed and sucked at the skull. My stomach did a flip and I arranged my little cemetery of bones in an attempt to completely hide the beak beneath them.

How did I get here? I wondered once again, this time with a smile tugging at the corners of my mouth. It was an accident, really. A problem with our visas brought Ben and me back to the city of Luang Prabang for a second time. After cursing the visa gods, we decided to make the best of our bad luck and trek to a remote village. 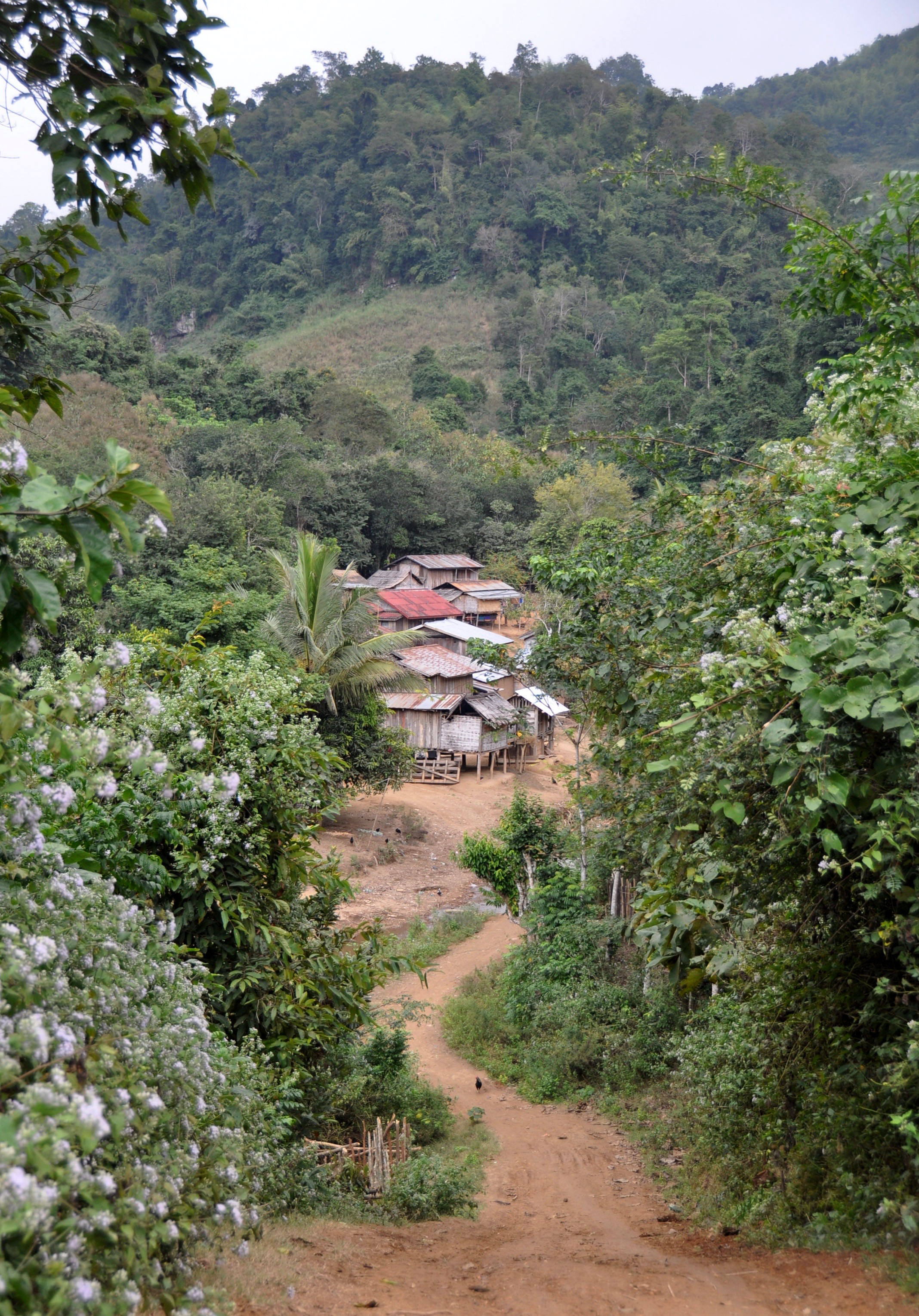 It turns out this was a beautiful accident that brought us to these people and this village, unseen by foreign eyes. And the fact that we arrived on a holiday made it all the more special.

“Whose your favorite football team?”

The young man with the chicken head in his hand was excited to practice his English. He had moved to the neighboring village on his own when he turned 12 in order to continue his education, which stops for most of the village kids after elementary school.

Everyone in the room looked on, waiting for my answer as if the fate of the entire village rested on my lips.

“Argentina,” I hesitated, choosing one of the only teams that I know a few players’ names.

Everyone nodded, as if I had chosen correctly. But then I realized most had no idea what I meant. I imagine they felt as I had before, not knowing what was being said, but happy to listen to these foreign words being spoken.

The village shaman, or medicine man, moved to the center of the room and everyone’s eyes fell on him. He made an announcement I couldn’t understand. When everyone stood, I copied. The shaman lit incense and began chanting as smoke filled the room.

Our new English-speaking friend explained that one of the boys in the village got a new motorbike and it needed to be blessed. Pieces of string were passed around, and we took turns tying them to the bike. Once we had each given the motorbike our own personal blessing, we made our way back to our plates of chicken for more rounds of “cheers!”.

When all the chicken bones had been gnawed clean, save the buried head on my plate, the chicken feet were brought to the center of the table. One of the English-speaking villagers explained that they believe that you can see your fortune in a chicken’s foot.

“It has to be boiled before it reveals your fortune,” he added quickly, as if I might start plucking up live chickens and turning them over to see what they could tell me.

One of the elders picked up the claw-like extremity and observed it with care while everyone looked on.

These withered toes apparently forecasted a good journey for those leaving the town the next day (aka Ben and me). Everyone nodded in approval, and a few yawns punctuated the silence signifying bedtime.

I took everything in one last time and memorized the faces around me that I knew I’d never see again. The young man who couldn’t wait to practice his English with the first foreigners he’d ever met. The young mother cradling her baby in one arm, while collecting dishes with the other. The toothless grandmother who kept grinning at me as if I was her own grandchild. The 16-year-old boy who the villagers believe has been blinded from a curse and will have to likely live his life with vision-obstructing cataracts.

I drank in all these images, and this time thanked the visa gods for this beautiful mistake that perhaps wasn’t an accident at all.

Then I got to my feet and took one last look at the pile of bones on my plate, that damn beak still peeking through. I made eye contact with the rooster and smiled.

Author’s note: This is a true story from our trek to a remote Hmong hill tribe village near Luang Prabang, Laos. This was the most incredible cultural experience we’ve had anywhere in the world. The interactions were authentic and we saw things that we as foreigners hardly ever get to see. We want to thank White Elephant Adventures for this experience and the villagers for their hospitality. We love that White Elephant employs local villagers, follows ethical practices and sets up authentic treks to villages that are both sustainable and non-exploitive. If you find yourself in Luang Prabang, consider trekking to the remote villages in the countryside with White Elephant. You won’t be disappointed. 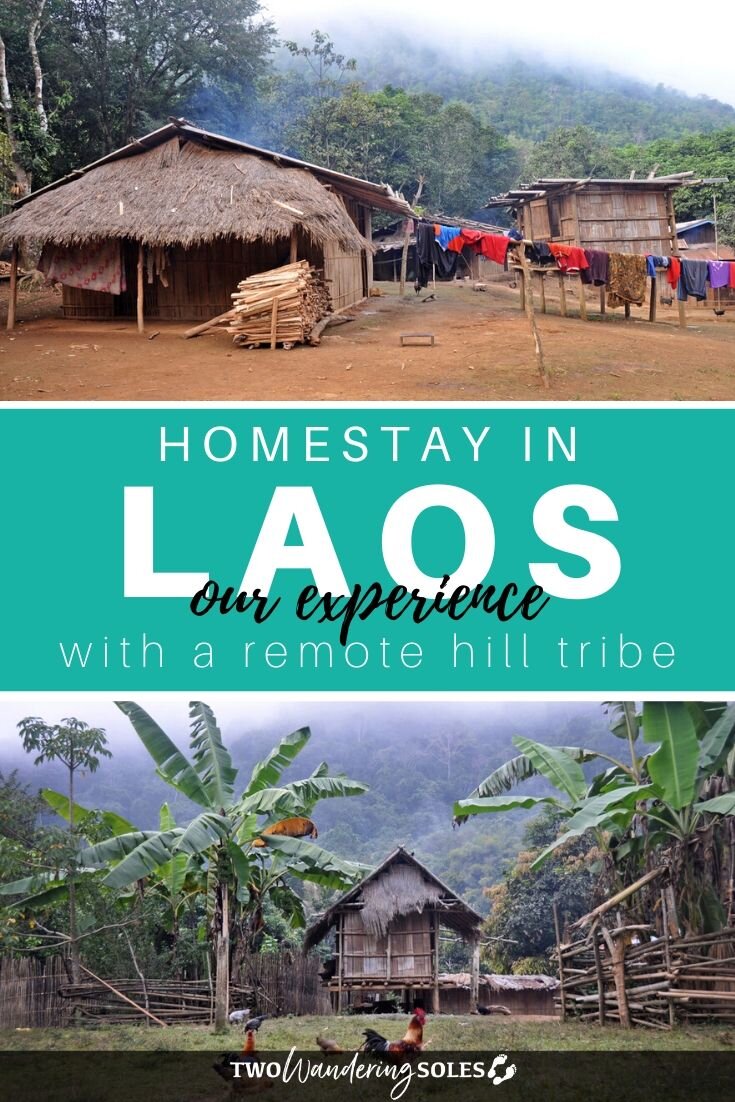 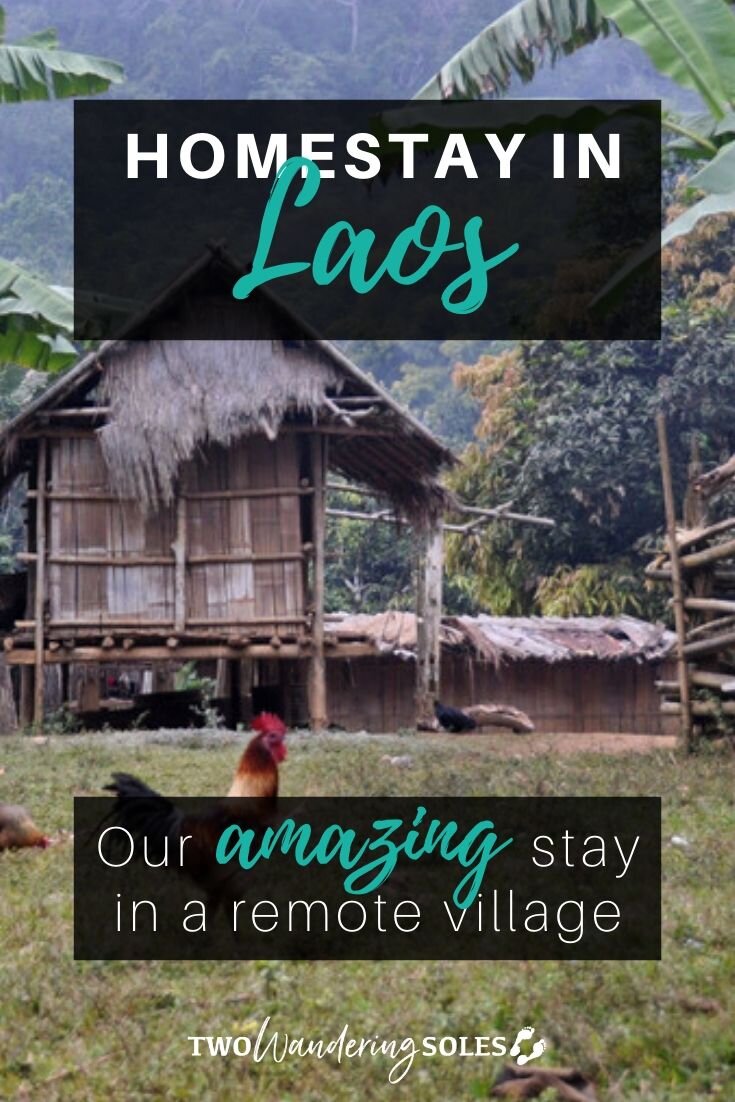 Have you ever done a homestay? What was your experience like?

Comments (14) on “Homestay in a Remote Hill Tribe Village in Laos: Our Amazing Story”