There are few places on earth that make you wonder if you’ve somehow been abducted by aliens and transported to a far off planet.

The Salar de Uyuni is one of these otherworldly places.

At one point in history, this region was a massive saltwater lake. The water eventually evaporated, leaving a thick layer of salt that stretches as far as the eye can see. Commonly known as the “Salt Flats”, this area is one of the most visited places in Bolivia.

There are two seasons in the Salar de Uyuni – wet and dry. Each year during the wet season, water covers the earth, turning the land into an all-encompassing, dreamlike mirror.

We were there during dry season, when you are able to venture into the middle of this strange, salty land.

Our journey to the Salt Flats started with a night bus that brought us to the sleepy little town of Uyuni. Situated on the corner of nothingness and oblivion, there really isn’t anything to do in this town… well, besides drinking wine, of course.

After getting situated in our hostel, we made a trip to the market to get some snacks. We ended up with a bag of oranges, cookies, four bottles of wine, and a plastic Godzilla figurine.

You will understand why in a moment.

After drinking two of our four bottles of wine, we ventured to town where we ran into some friends from earlier in our travels. We went to dinner at one of the thousand pizzerias in Uyuni. The pizza was actually shockingly good for Bolivia, and the specialty quinoa beer was quite tasty too!

After demolishing our food, we stuck around to play cards until we were encouraged to leave because the owners wanted to close.

The next morning, we embarked on our three-day, two-night tour.

There are somewhere around 80 companies in Uyuni that provide tours of the Salt Flats. Some of the companies are legit, and others… well, not so much.

We did our research and talked to other travelers, and the company name we kept hearing was Red Planet. At just $20 more than the cheapest of the companies, it was an easy choice.

And again, we were not disappointed with our decision to go with one of the “nicer” companies. While some of the other tour guides we saw along the way didn’t talk to their groups at all, our guide was incredible. He shared a lot of history and gave us insight on what it is like to live in this region.

Our first stop was at the famous train graveyard.

Years ago, Britain sent trains to Bolivia so they could export all the silver they were mining. What they didn’t realize though, was that the altitude of Bolivia is much, much higher than that of England, and eventually the trains all died – leaving them useless.

It was a surprisingly cool place to take photos and climb around on the trains.

Next, was what we were all waiting for: We made several stops in the Salt Flats, and took more pictures than I would like to admit. Our guides pulled out the floor mats from the Jeeps so we could lay on our bellies to get the obligatory perspective photos – which, as we found out is kind of an art.

This is where Godzilla comes in.

Because the salty earth stretches to the horizon in all directions, you can take photographs with a distorted perspective. We were able to take pictures with this tiny toy figurine towering over us, which made for a fun little photo shoot!

We shared him with the rest of our group so everyone could get a picture running from the “giant” beast!

Insider Tip: Be sure to pick up some props to bring because they make the photos so much more fun. And share with your fellow tour mates to make quick friends!

Just before lunchtime, we visited a salt processing factory – which ironically, is made entirely of salt. Our guide explained how the salt comes to the workshop in bricks that have been extracted from the earth, and is processed into what we use in our kitchens.

Though the process is long and strenuous, they make just two US dollars for an amount of salt so large, no human being could consume it in a lifetime.

Fish Island is covered in cacti and has some of the most stunning views of the Salt Flats.

When this area was a lake, you can almost imagine what it would be like to be on this island and look out into the water surrounding it.

Exploring Fish Island is pretty spectacular, but watch out for all the cacti. We got pricked one too many times!

That night we stayed in nothing other than a salt hotel. Everything – from the bricks to the beds – was made of salt. The only things that weren’t salt were salt were the toilet and sink (for obvious reasons!) and mattress, thank goodness.

In the Salar, these hotels are not uncommon. We learned that they have to be rebuilt every 15 years, as the rainwater erodes the bricks over time.

While it wasn’t the most comfortable hotel we’ve ever stayed in (umm, what are you to expect when it’s made of salt?!), it was a pretty unique experience!

The next day we made our way through the Atacama Desert, the highest desert in the world.

Related reading: If you love deserts, check out this list of the most beautiful deserts in the world and find out how to visit them!

We made several stops along the way at unique rock formations and different colored lagoons – red, blue and green – where flamingos gathered.

I don’t know about you, but I always picture flamingos in the tropics, so seeing them in this cold climate was a bit strange.

In all our travels, we haven’t see another landscape quite like this one, with its colorful lagoons, odd rock formations and salt flats that stretch on as far as the eye can see.

Throughout the desert, there are some incredible rock formations. The most famous of them all is a precariously delicate formation known as the “Tree” rock.

Just take one look at it and you’ll understand how it got its name!

While we were there, we saw a park ranger yell at a tourist who was attempting to climb the “tree” despite signs warning people not to even touch the formation.

Responsible travel tip: Please respect signs that say no climbing or touching. They are often in place to preserve vulnerable and delicate places so they can be enjoyed for years to come.

And if you like climbing, don’t worry. There are plenty of places to explore and climb and get lost amongst the boulders!

The other bizarre feature of this landscape is the prevalence of geysers and hot springs along the way.

Don’t let the chilly temperatures tempt you into jumping in. The geysers are far too hot for that. But don’t worry, there is a way to warm up in this surprisingly cold desert…

Hot Springs in the moonlight

Our hotel for the second night was dorm style, with 6 beds in each room. Five women and Ben.

The biggest perk of this hotel (other than the communal sleeping arrangement!) was that it was situated just meters from a beautiful natural hot spring.

Red Planet is the only company that stays near the springs, so we were able to spend the night soaking, sharing stories, and passing around bottles of wine with our group.

As we were leaving the next morning, we saw all the other tour companies arriving and crowding the springs. We felt lucky to have it all to ourselves the night before. It was definitely a highlight of our time in the Salt Flats.

Planning a trip to the Salar de Uyuni Salt Flats? 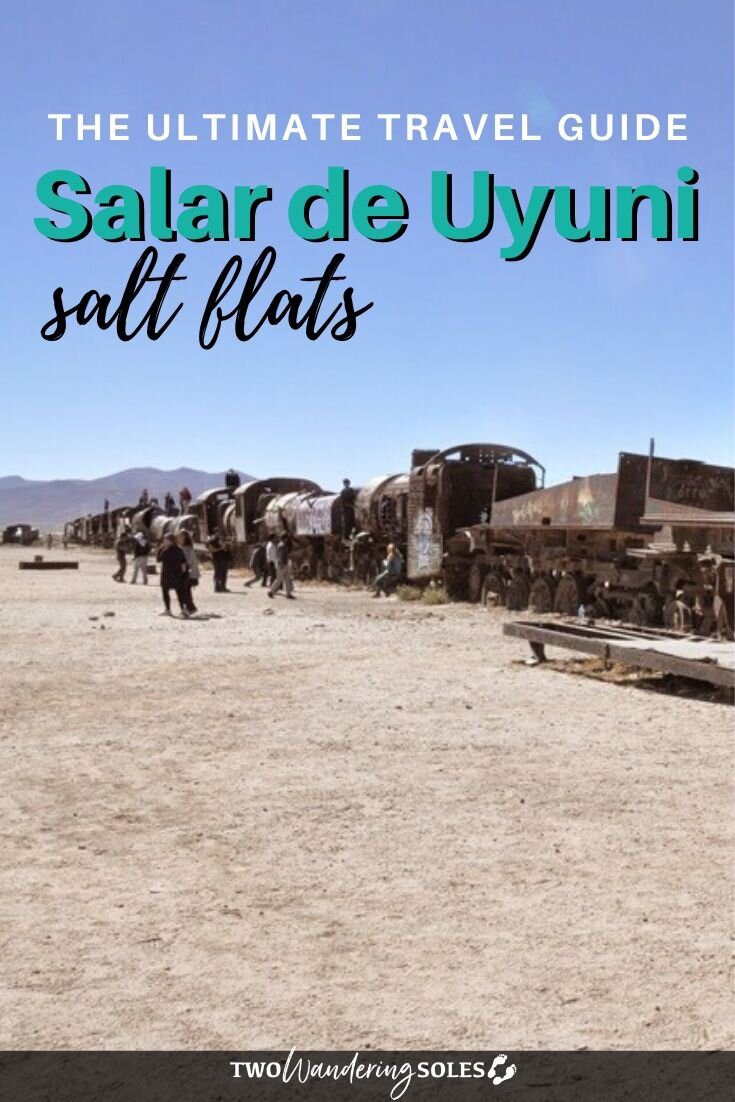 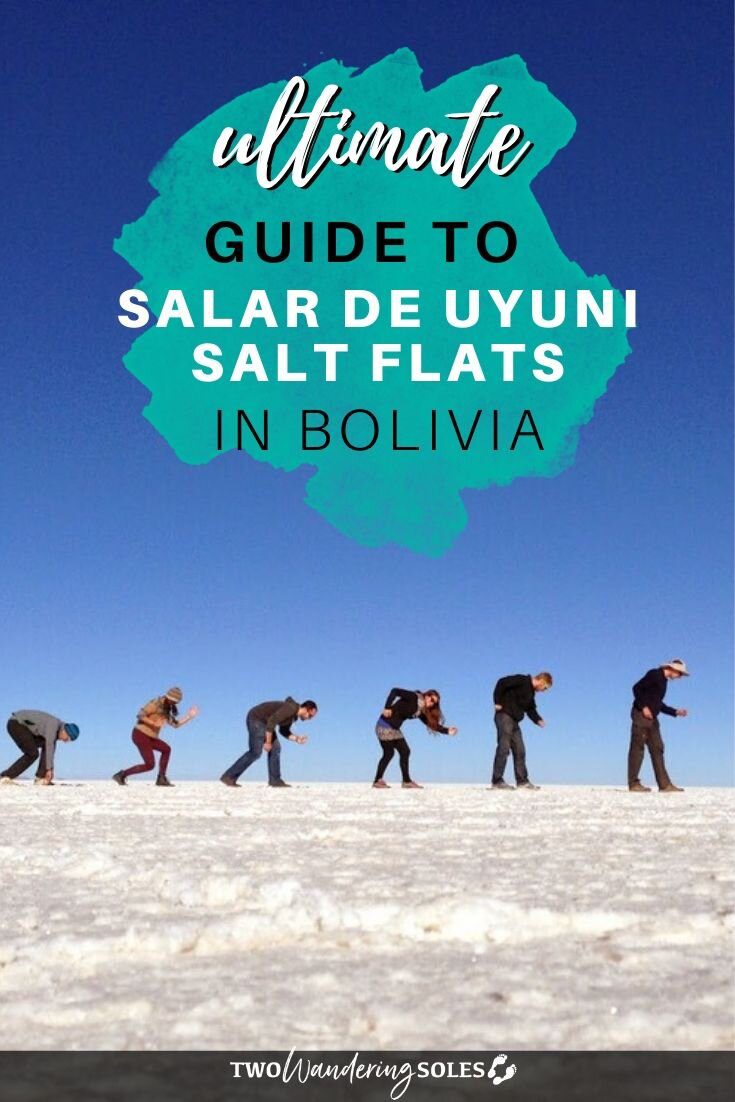 Have you been to Salar de Uyuni? What was your favorite part?