It is rumored that in 1999, Queen Elizabeth asked to be taken to the “most Korean place in Korea”. She was brought to the town of Andong to celebrate her 73rd birthday.

Famous for its traditional folk village and annual Mask Dance Festival, Andong attracts visitors from near and far each September.

We were no exception.

After catching an early morning bus, we made our way to the festival grounds where we found our friends waiting with a local delicacy in hand – toothpicks skewered with bugs.

You can often find locals stirring a pot of these steamed and seasoned silkworm pupae at festivals, selling cups of them to curious foreigners and hungry Koreans alike.

This salty street food, known as beondegi, is often paired with beer… perhaps if you consume alcohol at the same time, you might not mind the fact that you are eating bugs?

Our friend came back from the “bug stand” with a heaping cup of these once creepy-crawlers.

I tried not to think about it as I popped one in my mouth.

So how did they taste, you ask?

(Caution: if you have a weak stomach, do not read this next part. You have been warned.)

It was very salty and crunchy at first – kind of like popcorn… not bad, right? Well, after the crunch came a juicy, oozy surprise. And the taste was something like you’d expect from a bug. I swallowed as quickly as possible, but the aftertaste wasn’t any better than the gooey-ness… bitter and almost fishy-tasting.

I don’t think beondegi will be a regular snack of mine.

After sufficiently ridding our mouths of the buggy remnants (and capturing the moment in photograph form of course), we meandered through the festival tents and settle inside one where we were able to make our own Korean-style mask.

Though the mask designs we chose were traditional, the method of decoration definitely wasn’t. We reverted to children as we designed and molded our masks with floam – yes the brightly-colored, sticky foam balls from the nineties. Apparently I missed out on this crafting trend during my childhood, but this mask-making session made up for it.

After two hours of “floaming”, we made our way through the food stalls for a quick lunch and hopped on a bus, bound for the traditional village made famous during the Queen of England’s visit.

The Hahoe Folk Village is nestled in a valley of the Taebaek mountains, and its perimeter is etched by a winding river on three sides. With a mix of tiled and thatched-roof dwellings, its no wonder that this charming village recently received UNESCO World Heritage status.

We wandered up and down the narrow roads, exploring this quaint town that is still home to 240 residents.

Just before dusk, we joined the crowds in a wooded area near the river where the mask dance was about to begin.

Now, the term “dance” is a bit deceiving. The almost all-male cast wore traditional masks and costumes, and strutted around stage telling a story. Aside from a few choreographed movements, it was more or less a play.

Now I don’t understand the Korean language, so most of the storyline was lost on me, but what I did pick up was a little disturbing.

There was one scene where a man, dressed as a woman, squatted mid-stage and “peed”. Meanwhile, another rather creepy character watched. When “she” stood, there was a puddle of presumed “urine”. The strange man proceeded to scoop up it up and smell it.

In the next scene, a seemingly drunk character danced around wildly and locked eyes with me. He called a Korean woman on stage and pointed in my direction, whispering something to her.

I knew what was coming next.

The woman grabbed by hand and brought my friend, Alex, and me in front of the crowd.

The man coaxed us into dancing around stage. He then said something in Korean that made the audience erupt in laughter.

Oh, to be a foreigner in a crowd of locals. You never cease to stick out.

After the performance, we had time for just a short walk along the river’s edge to watch the locals set up for the traditional fireworks show that was to follow. Ropes were strung from a cliff on the opposite side of the river which they would later light on fire.

Unfortunately, most of us had to miss the fireworks show in order to catch the buses heading back to our respective cities. Our friends who stayed though, raved about the fireshow that included flaming bushes being thrown over the cliff’s edge and into the river.

It doesn’t sound like any firework show I’ve ever seen, and I’m still pretty bummed we had to miss it. 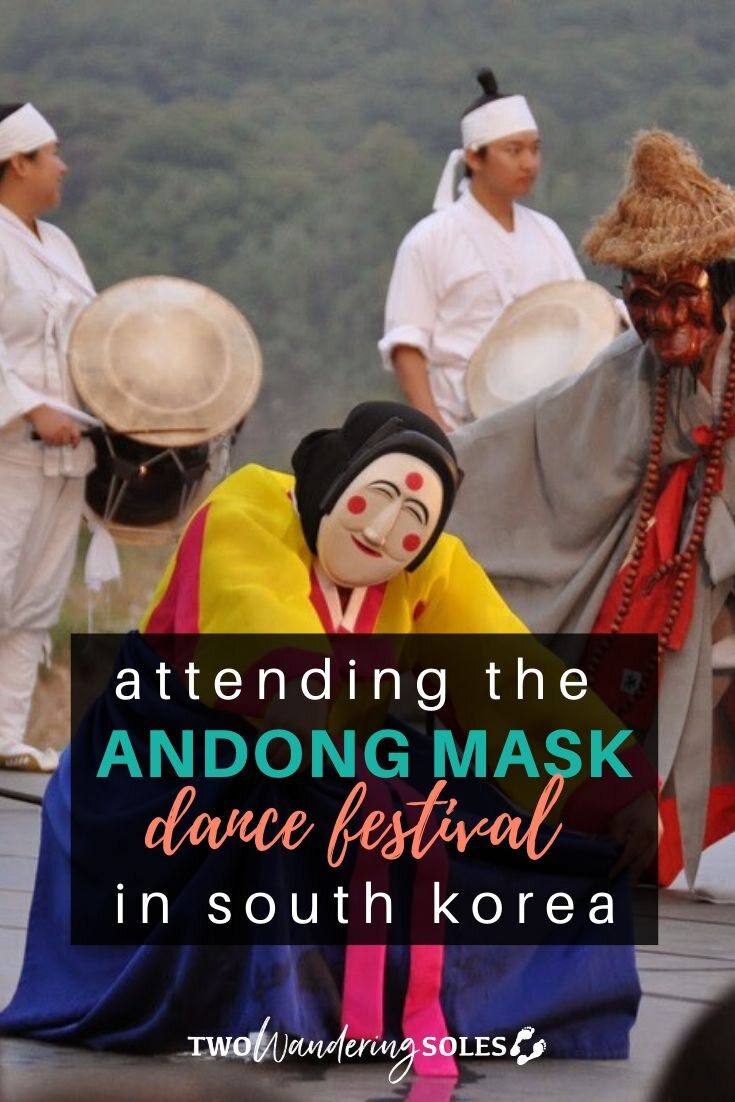 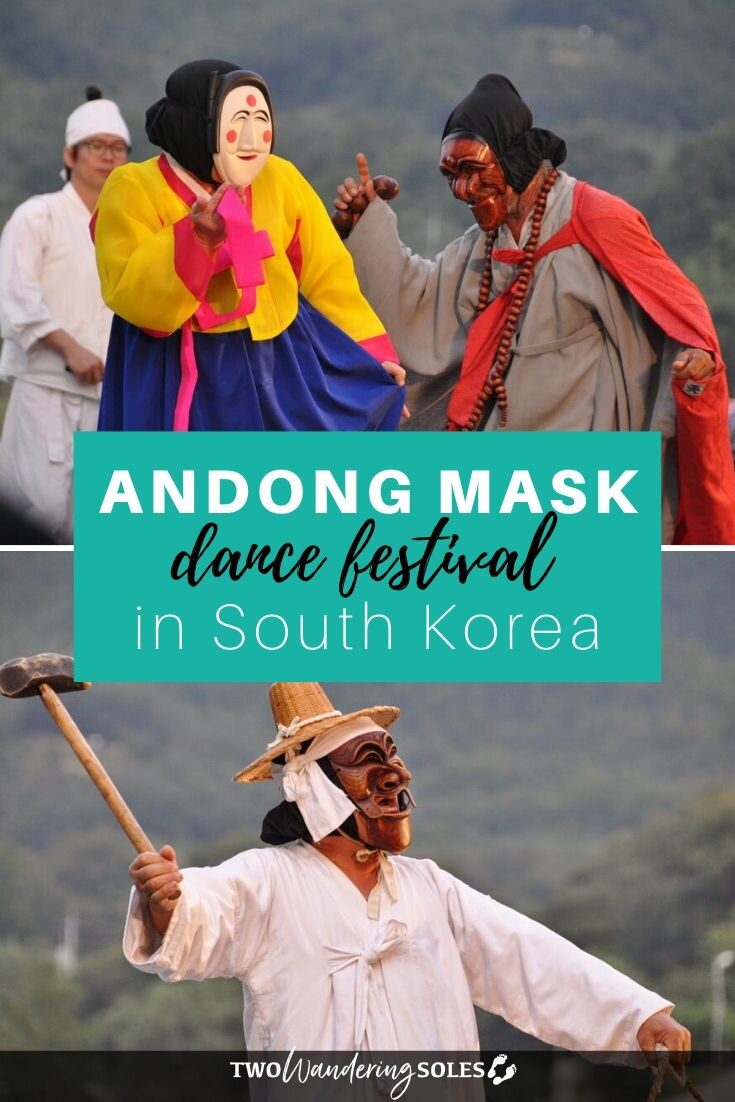 What do you think of the Andong Mask Dance festival? Would you want to check it out?